I wanted to talk about an issue today that I see with a great deal of regularity.  Statically setting an external or public DNS (Domain Name System) server in the DNS client settings of a machine that is joined to an Active Directory domain. 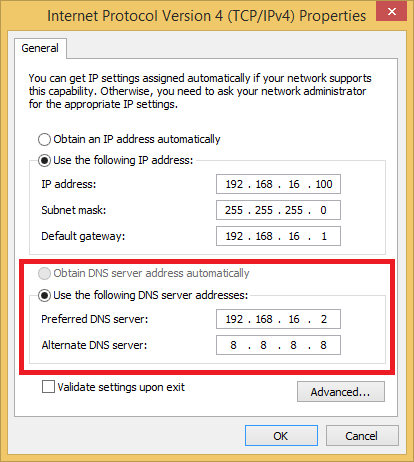 In the above picture we have the Active Directory domain controller as the Preferred DNS server.  However we also have one of the Google public DNS servers as the Alternate DNS server.  At first look, it appears this might be a good idea.  If the Active Directory domain controller goes down, this PC can still resolve names on the Internet. However there is a significant disadvantage to setting up the DNS client in this way.  To understand this disadvantage, we must first understand how the DNS name resolution process works in Windows.

When a Windows system, either client or server, needs to resolve a name it goes through the following process.*

*I have omitted WINS from the process as it is rarely used anymore.

Let’s dive a little deeper into bullet point two.  There are two important takeaways for the DNS client cache.  The first is the time limit a record or lack thereof is cached.  This is typically referred to as TTL (Time To Live).  A positive answer is cached for its TTL or 24 hours whichever is less.  A negative response, that is when the record does not exist or cannot be found, is cached for 5 minutes.  The second takeaway is that clearing the cache can only be achieved by restating the DNS client service, running ipconfig /flushdns or restarting the client.

So now we have a better understanding of how DNS name resolution and the Windows DNS client work.  Let’s go over why public DNS servers should not be used.  In most environments there will be DNS timeouts on occasion.  As we now understand a DNS timeout can cause the DNS client to switch to the next DNS server in the list.  If the DNS client switches to a public DNS server then queries for internal resources, such as domain controller service records, or other systems on the LAN (Local Area Network), will fail.  So the bottom line here is that using an external DNS server in the DNS client settings can and usually will cause unpredictable behavior.

One final thought.  The default configuration of the Microsoft DNS server will allow Internet names to be resolved.  This is accomplished using root hints.  If a public DNS server must be used for Internet queries, then a DNS forwarder can be added in the DNS server configuration.

I hope you found this article informative.  If you have anything to add or see something that needs a correction, please leave a comment below.

I ran across an interesting issue this morning.  I had a customer who was not able to browse for computers on most of his workstations and servers.  The problem seemed to start within the last two weeks.

I checked the workstation, DNS client, network list, and network location awareness services.  They were all running.  The problem turned out to be the Function Discovery Resource Publication service.  This service was not started and was set to manual.  Without this service the computer will not advertise itself and will not be able to discover other computers on the network.

So if no computers are showing in Network in Windows Explorer check the Function Discovery Resource Publication service and verify it is running.  I would also recommend setting it to Automatic start so that everything works correctly after a reboot.

I hope this article has been informative.  If you have anything to add, please use the comments section below.

Good morning.  I ran into an issue I see from time to time in support.  One of my customers was unable to find where his shares were located on the filesystem.  The solution is quite easy to solve with a single command.

Running that command will display all shares on the server including hidden and administrative shares along with their paths.  This command will work in any version of Windows and does not require elevation.

I hope you found this article informative.  If you have anything to add, please do so by adding a comment below.

Good morning.  A quick tip for today on an issue I run into from time to time.  I have seen a lot of Windows machines in my time.  One of the problems that I run into on a fairly regular basis is network communication issues.  A possible cause for these issues can be due to the Windows firewall being too restrictive.  That is what we are going to discuss today in this post.

Before we get into how to fix the network profile, let’s first discuss why the network profile even matters.  To do that we need to talk about the Windows firewall a little.  The Windows firewall provides a barrier between the Windows operating system and the network(s) to which it is attached.  It has 2 or 3 distinct profiles that it will operate in.  Whether it has 2 or 3 depends on if the system is joined to an Active Directory domain.  Each These 3 profiles are as follows:

Now that we know about the profiles and what they do, how can we change the network profile.  If this were a client operating system like Windows 8/8.1/10 then it would be easy, just go into Network and Sharing Center and change the profile.  On a server operating system, for instance Windows Server 2012/2012R2/2016, the option to change the profile is not there.  That is, unless you count the side pop-out asking if you want to discover computers on the network.  Clicking yes on that pop-out will put the network profile into private.  Clicking no will put it into public.

If you clicked no, there is still hope.  There is a PowerShell command that can be used to set the network profile; Set-NetConnectionProfile.  Here is the command I use to quickly change the mode of all network cards in a system.

This will set all network cards to Private profile.

If you need to set just one network card, you will need to know the interface index.  To find this run the following command.

I hope you found this article helpful.  If you have anything to add or just want to leave a comment, please do so below.

Good morning.  I had a case yesterday that yielded several interesting article ideas.  This is probably the most interesting one, and I have seen this very issue on at least three occasions.  The issue started on a domain rename.  If you have ever done a domain rename, you know there are quite a few steps.  After doing some checks and making some corrections we were able to complete the domain rename.  My customer then advised that his Folder Redirection policy was not applying on any workstations.  So in this article I am going to cover how to troubleshoot a group policy not applying and the specific fix for the situation I ran into yesterday.

The first step when troubleshooting just about any group policy issue is to pull a group policy report from a client that should be getting the policy.  My preferred method is to go to a command prompt and run the following commands:

This will run the report and save it to a file called report.htm.  The second line then opens that report in a web browser.

When troubleshooting an issue where a policy is not applying I like to focus on the denied sections.  In our case folder redirection is a user policy, so I checked there.  Below is similar to what I found.

There were two clues as to what the issue was here.  The first clue is that the policy name is not being displayed.  Instead we just see the GUID (Globally Unique Identifier).  The second clue is the reason denied.  We can see it was denied because the policy is inaccessible, empty or disabled.

The next step was to check to see if the policy was accessible in the SYSVOL share.  In our case we had no problem accessing the files.  We then checked in the group policy management console.  We verified the policy was not empty or disabled.  So it would appear that we have eliminated all possible issues.  However there is another set of permissions.

This was the set of permissions that were not correct in our case.  The Authenticated Users group was missing.  I have seen this issue on several occasions when one of my customers is trying to “lock down” the server.  Even if you add in another group, for instance Domain Users, and the user and/or computer is a member of that group, the GPO (Group Policy Object) will still fail to apply.  The fix is quite simple.  Add back the Authenticated Users group and give it read permissions.  After adding back Authenticated Users and running a gpupdate /force on the client the policy applied without issue.

I hope you have found this informative.  If you have anything to add or just want to comment, please do so below.

Today we have a quick tip from Luis, one of my partners in crime.  He had a customer that was experiencing poor file sharing performance with Windows 10 clients.  After replicating the environment Luis discovered the issue was due to the SMB (Server Message Block) version being used.  He was able to increase the performance by forcing a lower version of SMB to be used.  He discovered though that SMB version 1 is no longer supported by default in Windows 10.  He found a way to turn it back on.

I wanted to share that with you as it can be useful in a situation where there is an older file server.  When I say older, think Windows 2003 or Windows XP.  So it is no wonder than Microsoft has decided not to allow SMB 1 by default.  I don’t recommend following this procedure simply to increase performance as the trade-off is less security and fewer features.  Also following the below process will not by itself increase speed, as the highest version of SMB will be negotiated*.  This process will allow a Windows Server 2016 or Windows 10 client to connect to an older Windows system hosting a file share.

To enable SMB 1 do the following on the Windows Server 2016 or Windows 10 client.

I hope you enjoyed this article and found it informative.  If you have anything to add or just want to comment, please feel to do so below.

*If you are dead-set on running SMB 1 to improve performance have a look at this Microsoft article.

Time for another quick tip.  In case you hadn’t guessed already, I really like Essentials.  You get quite a few features for a much better price than Standard edition.  There are some limitations though with Essentials.  The good news is that the server can later be upgraded to Standard and the process only takes a few minutes.  On the flip side, a standard license has to be purchased.

Let’s walk through the upgrade process.

You should see output similar to below.  Reboot when prompted. 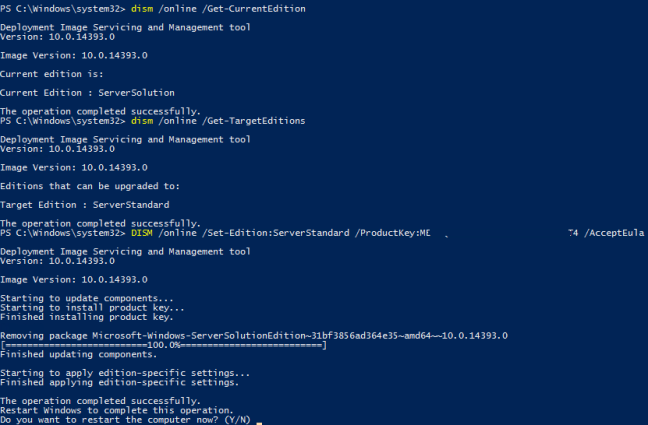 I hope you found this informative.  If you have any comments or suggestions, please leave them below.